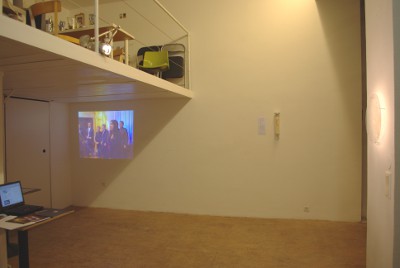 The gallery Schleifmühlgasse 12-14 is a nice space in the interesting part of the city. It seems quite alive from the point of view of a fast traveller. After installing the works and deciding about where will the projection be I thought more precisely about the way of presentation in the evening. In the end it just didn’t follow my plans. People started coming half hour before they should so instead of a presentation at 7 p.m. a different approach was needed. I explained the works and read the comments (as the artist demanded) for the Vatentat of Brecelj pretty much individually.

The day after Anna Watzinger calls me and suggests to meet before my departure. She comes with the idea of taking with me an apple that has grown in the experimental garden of University of Agriculture in Vienna. This individual apple has been a leftover from her previous experiment from a work in progress “Investigation of an apple” and it turned out to be most suitable to build relations to other two works in progress of hers, “Studies of time” and “Ein-Stein”. The apple will have to be photographed in all the places to document relations with the specific environments and with occasional close-ups to record stages of constant changing – the traces of time