The event in the DEPO gallery in Istanbul seems already far behind. It took place more than a month ago in a room that is a part of an interesting exhibition space in an interesting neighbourhood. 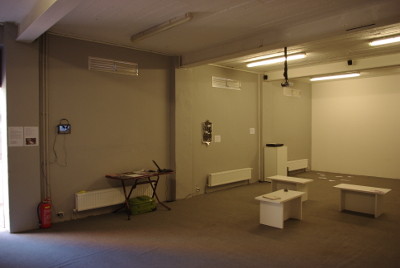 Istanbul was different from other cities I travelled to with this suitcase in many ways but first to be mentioned is that I spent there much more time than in any other. But let’s start at leaving Bari, (I will come back there with news from Zeynep Morali’s letter though) with a boat on Friday, September 24 evening to land in Patras, Greece the next midday. It took few hours by train to reach Athens, changed once before crossing the Corinth – didn’t look for a direct bus. In Athens was most convenient to catch the last night train for Thessalonica. I left the suitcase in a non-space for the first time after the hostel reception desk in Budapest and even there it ended up with a presentation. I left the suitcase locked in the locker of the railway station and walked along the streets to spend the evening hours without being bored too much. When reached Thessalonica was the plan to take a direct train to Istanbul that takes about 24 hours but it was not running for the next four days. In the early morning seemed most logical to take the first train to the last bigger place before the border. It took about eight hours to reach Alexandroupolis. I never thought Greece was such a big country (or do the trains just drive slowly compared to Slovenia where one can cross 300 km in just 5 hours). Of course I am sarcastic because it still feels good to think about luck I had to catch the afternoon bus that brought me to my destination at 10 p.m. and one night before planned.

In Patras I met Bettina and Fernando from South America that came on the same boat as me from Italy and we travelled together since. Bettina had some directions, no address though, for finding a cheap hostel. The bus terminal is pretty far from where we were aiming to and somehow we reached the Hagia Sophia district by metro bus and tram. The hostel was nice and clean with wireless internet access and breakfast included in the price. Bettina and Fernando came to Istanbul just to get visa for India. None of them ever showed any interest to see what was in my suitcase. The apple of Anna Watzinger that I kept carrying around and taking pictures was somewhat amusing to them but nothing more. It just makes me wanting to travel across the Atlantic and learn a bit about what is happening in the field of art there. It seems that here in Europe my travel was a curiosity. I never expected that all the aspects would be perceived at one time, just hoped that some of them and differently in different contexts would be.

Zeynep Morali from DEPO Istanbul sent me a mail on the 3rd day in south Italy writing about an attack on the evening of the opening on a gallery not far away from DEPO. There was a link to the article that let me understand that local people were not happy with the cultural and commercial development in the neighbourhood. 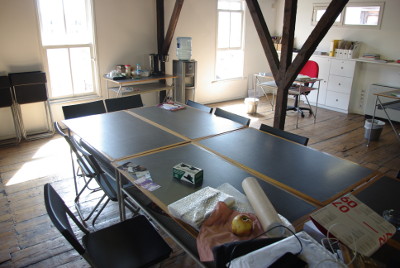 Later, when I visited DEPO for the first time, the relations in that neighbourhood revealed themselves a bit more. Zeynep suggested me to visit two galleries up on the Istiklal Street. I took the first street just around the corner and couldn’t miss already from the beginning that people in those tall buildings of a more prosperous past now hardly survive. My way up was surrounded by material poverty, ruins, darkness and decay that became even more evident when bliss of the commercial street on the top started to bombard my eyes and mind. I don’t want to judge about aims, ways and results of the progress in this area that some told me was not safe during nighttime just few years ago but the life-size plastic tank balloon of an art exhibition inflating and deflating in a display window facing the street looked just like show-off of the elites that have power in their hands.

DEPO Istanbul is a private institution, just like all involved with contemporary art there, seems to aim towards socially engaged projects and not having any direct commercial tendencies. At the time I was there, there was an exhibition of works of Turkish artists curated by the owner of the commercial gallery attacked a couple of weeks before. Zeynep planned to offer me a room after the official operating hours of the gallery at first but after considering the unrests in the neighbourhood and the involvement of that particular gallerist with DEPO she decided to do the event before the night falls. Occupying the room where a work of an artist I don’t remember the name or title of the work, was presented made me feel like doing some kind of aggression over the work and the exhibition as a whole. But after all it seemed the most sensible solution and I don’t believe that traces left really do any harm.

Setting-up the exhibition from the suitcase was far from routine job but I already felt quite comfortable with all the artworks. While waiting for the announced time of the event Asli Cetinkaya and I met. At that time she was the manager of Kasa gallery, that I visited few days later for her and for the exhibition. Meeting Yasemin Özcan Kaya, one of the artists of the exhibition there was pure luck. 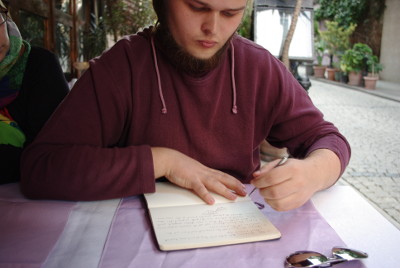 In DEPO I had a feeling that most of the visitors at the Art in a Suitcase event were there accidentally and were just surprised visitors of the exhibition. The presentation was as always concluded with the invitation to the artists to participate at the travel within the suitcase and someone talking with his friend in a language totally unknown to me approached and we agreed to meet few days later. He was Algirdas Narmontas from Lithuania and wile drinking tea on Sunday afternoon we talked about the work he proposed for the suitcase. He wrote instructions in a classical conceptualist manner for realising the work at the presentation in Ljubljana. In short I’ll have to buy a new pencil and a sharpener and sharpen then the pencil until it is not usable any more. Beside the rest of the pencil and the sharpener all the “scrap” material left from the sharpening process has to be exposed as well.

Staying for one more week in Istanbul was planned with a reason of a better acquaintance with the city’s art contexts and contents. Three of those extra days my body and mind were occupied by serving the bureaucratic needs of Slovene Ministry of culture, the project’s main source of funds. At that point I got aware much deeper of how institutions affect even a seemingly independent project.
Asena sent me a list of people I then contacted and arranged meetings. The first one was Mark Henley, an artist that comes from New Zealand but at this time is based in Istanbul. Together with Matthias Crause they created  a temporary space called Black Door Istanbul. The next one to meet was a curator and art critic Nazli Gurlek that gave me impression of being an interesting person but unfortunately she had time just for a quick courtesy meeting. On the evening before my departure another curator, Önder Ozengi suggested to meet for the dinner. An artist Caner Aslan joined us too and in the middle of an animated conversation came Matthew Schum, an art theoretician. Of course I explained the main reason for my stay in this city and I took the advantage of the company and told about the possibility for artists to join in with the suitcase. At the end of my journey it didn’t surprise me any more that the artist sitting at the table didn’t respond to it but I really didn’t know what to think about what Matthew suggested. During a long and tiring discussion many issues opened up around the case that a souvenir key chain his father had brought him from Taiwan some time ago and he carried it with himself ever since should travel within the suitcase. I felt quite ambiguous about it but the challenge to think more about the meanings in this regard was compelling enough to finally accept it.