It has been already some days that I am staying in south Italy and still didn’t write anything to post on the Internet. Pretty fast travelling and meeting many people in such a short time seems like a bad excuse for not doing what should be a regular routine. But with me it works just fine anyway. 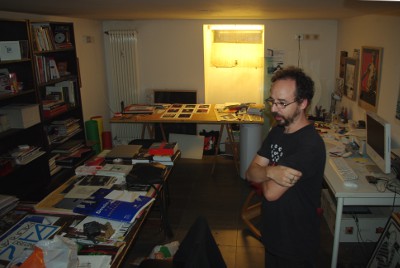 Gianluca Constantini came to the railway station to pick me up and he took me the hotel. I just left the luggage and off we hit the (paved) road of the old centre and reached the gallery of Mirada Association within 15 minutes. The place in via Mazzini is an exhibition space headquarters of the association with a workshop and a small bookshop. The association has been established in 1997 and today operates mainly as designer of exhibitions and other events as well as a producer of events and publications of comics and projects of young artists.

At the event I tried to keep on with the stingy descriptions of the artworks but not as much as in Berlin by telling just what I felt essential interpretation. Sometimes visitors ask for more by themselves but sometimes it is possible to see and feel which visitor and at which work something more is needed. On the other hand it is this kind of event with the presence of a person in charge that permits this technique of improvisation and multiple way communication.

Ravenna is a city of mosaics and it is possible to study the techniques either. On one hand there is the need of craftsmen for preservation and restoration of the beautiful antique works of art and to produce new copies for a variety of needs starting with satisfying the wishes of tourists that visit the city. The other commercial possibility for mosaics is the ornamental. Speaking about this with the people at the event it revealed that the education system there encourages just the traditional approaches to the subject and innovative solutions get constantly rejected since ages. The result seems to be that mosaic doesn’t manage to enter into the category of art and it doesn’t develop itself adequately. But, (it feels good this time that there is a “but”) there are some that have learned the techniques and still have a researching kind of spirit that reflects the mosaic thought instead of just simply producing an image of stones or glass tiles. 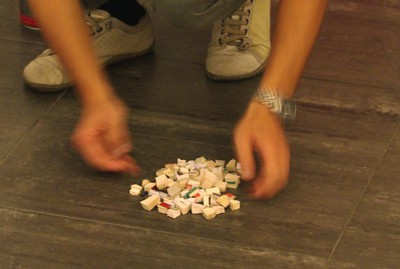 By the end of the evening Luca Barberini proposed to add an installation that he did some time ago. By having cut pieces of books at their spines he has got a small heap of small empty books that in fact act as mosaic tiles. It would be possible to use them in a fixed form but as a material of some possibility releases much more associations and reveals a true mosaicist’s mind.

The day after I spent few hours with Felice Nittolo who came to Ravenna as a painter but fell in love with the mosaics an learned the techniques. Presumably not burdened by the local tradition he was free enough, I would still rather believe that it is just about his spirit, to enrich it with more contemporary approaches and therefore make it more alive as art. Beside his active artistic life he teaches mosaics at the school where Luca Barberini attended his classes. Another important activity of my interlocutor is running an art gallery that produces exhibitions monthly and among them there is a long-term project of presenting the old masters from which he received knowledge himself years ago. This shows a responsible attitude that one hardly finds in society – being aware of the roots and planting new seeds too. It is this way that one can speak of tradition without abusing the term to conceal infertility of simple continuity.