From the train to Dresden seems the event in m.odla gallery somehow far behind. It must be the excitement about preparing the next presentation and perhaps the intense past might have influenced my perception of time as well.

Daniela Deutelbaum is an artist that has decided about two years ago to use the entrance hall of the building where she lives as an exhibition space. Together with her neighbours they decided that she would use a vitrine (a glass cabinet) that is hanging on a wall. She presented there until now about 15 projects by different artists. Most of them were in some way connected to photography and through the course has developed into a serious art space. Beside the gallery Deutelbaum started a residency programme too that takes place in her apartments in the 4th floor of the building. 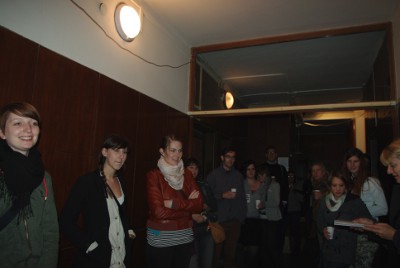 Setting up the artworks in the entrance hall was a bit tricky. Since there has never been an exhibition that would exceed the space of the vitrine everything was to be figured out from the scratch. The main issue was the lack of totally white walls for the projection and the transparent painting of Uršula Berlot. The solution was to play the video on a computer and the painting met a piece of white surface in the staircase, which ended up as a very suitable solution. The whole exhibition was some kind of a tunnel experience with lights switching on and off all the time depending on movement sensitive switches placed in the doorway.

Personally I wouldn’t call such place as an alternative exhibition space because it is already long ago since galleries and museums are not the most interesting places. And even when these kinds of institutions organize shows in other spaces (alternative for them, not for the audience) they always feel kind of cold and distanced like idols on their pedestals. The entrance hall is a part of everyday life and so were the artworks too. They were not trying to seem curiosities from a distanced spiritual space of an absent artist but rather the experiences interweaved with the daily routine and ephemeral occurrences.