By embarking on the boat to Greece in the port of Bari it feels like having tried completing the list of public transportation means, the sea was calm but the boat was shaking a bit all the time and during the sleep it felt like a German train to the point I could imagine it making roundabouts.

Mola di Bari is a minor city not far from the capital of Puglia and has developed from a fishermen town to a centre that seems to promise much as a place for tourists and culture. Caterina Loporcaro and Jole Fitto represent the Pangea association that hosted me with Art in a Suitcase. Since they didn’t have a fixed place to organize events it wasn’t sure even at my departure from Koper where the event will take place. 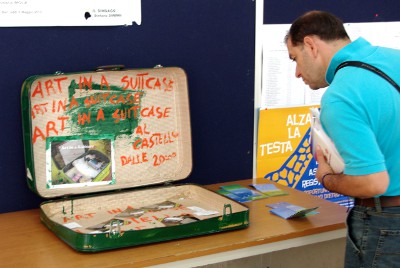 Luckily the municipality replied positively to the needs of Pangea and offered a space in Castello angiuino, presently a museum and an event and exhibitions place, for a period of six days. At first I was quite surprised for two reasons when Caterina announced the exhibition to last for almost a week. One reason was because I never planned to do more than a one day or one evening event and the second because I didn’t see any possibility for staying more time than planned at the beginning. Any way I had to be in Istanbul not later than September 27 and the travel by boat and train simply takes 3 days. In the end we decided to set up the exhibition for three evenings and be present all the time of accessibility for the public. The first presentation was just before the official hours to Vito Giannulo a reporter of RAI 3 who then interviewed me for a new transmission Estovest that will be broadcasted later in February. Some questions were about the project but some were about certain issues that concern differentiation between east and west. 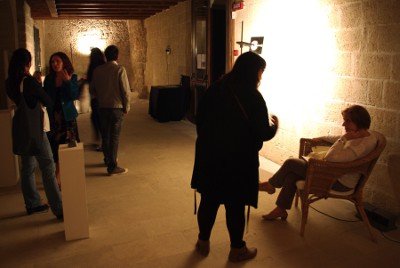 The next presentation on the first evening was pretty linear by starting when people came and ending with one round and discussing a bit about everything. The next evening came more persons and not at the same time so I had to repeat some things twice or three times. The last evening was even stranger since guests were coming in rounds during presentations so I simply toured the room 3 or 4 times so continuously so that everybody got everything and the issues that the exhibition and the project deal with were discussed in the meantime. Most interesting was when the visitors started to discuss among themselves so the two-way communication just between them and me evolved in a more interesting form.

Caterina presented me an interesting person in Altamura, Emar Donato Laborante. He is a poet and an artist and runs a place called Crepes and Books in the historic centre of the city. Beside the business on the ground floor he tries to make the place alive with art exhibitions and events. Originally used to be just occasionally organized but in the last year he curated a long term project called Transumanza. The space in the basement accessible for not more than 6 persons at one time artists from Lucania set up exhibitions installations and create ambients. All together seems to be a very interesting place where one can meet interesting people.

Actually it was at exactly in the Crepes and Books that Francesca Sardone and I met for the first time. She came on the second evening to Mola di Bari and she told about some very interesting projects she did in the past. One that I find most intriguing was a book of memories that she made from memories and objects of other people but bound as a one-person story of life. She was eager to participate within the suitcase but the book was unfortunatelly too big and I was leaving to soon to meet once again.