Leaving Dresden behind seems in a certain way like leaving the eastern Europe. I have met Berlin in past years and it doesn’t really breathe like the last three cities, and Vienna was on the other hand totally different experience as well. Surely i have to assume responsibility of not applying the appropriate technique at approaching to the audience or even take in consideration that my approach to curatorship in some places, in some contexts just doesn’t have any meaning. 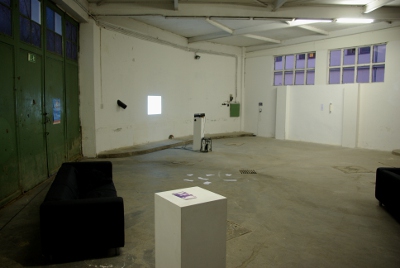 Riesa-efau started in 1990 as an association based on voluntary work in Friedrichstadt, a peculiar part of Dresden that lies between two shanks of railway, to create a space for artistic and social dialogue. Today Riesa-efau is an important cultural forum institution in the city and through the years it has achieved national and international renown. Motorenhalle, the main exhibiton space, is a decently equipped structure for experimental projects as well as larger exhibitions. There is another gallery in the building across the street where one-man exhibitions usually take place. Runde Ecke is just recently acquired space in the corner of same courtyard and is presently in the state Motorenhalle once used to be and consequently not really useful during wintertime. Perhaps not behind all this but more like under it as a strong pillar stands Frank Eckhardt, one of those activists who captured the place in those dynamic times and still takes care that things evolve responsibly towards society and towards art too. During the course of time riesa-efau managed to create facilities to offer some kind of residency possibilities. Just at the time I was there, a group of four artists were creating in Motorenhalle an experimental space (Nordwand) based on process, cooperation and consent that will finally reach the stage of a formed exhibition but still holding some traces of the process.

Runde Ecke means in English something like round corner because the corner facing the crossroads is rounded. The interior is some strange quadrangular plan that has only 3 walls. The smell of motor grease accompanies the first impression of the space that still feels empty enough to allow the artworks to speak for themselves.
Only few people came to the event but were of course worth the effort. We watched through the  Marko Brecelj’s DVD of documentation of Soft Terrorist performances and had a pleasant conversation. Kata Huszar, an artist presently based in Dresden that contacted me already weeks ago took me after I packed the suitcase again to another opening in Neustadt where we met some friends and fellow artists of hers that were an interesting company for the evening. The day after I met with Mikka Wellner, that came from Berlin to study art here. After we visited together the Transit exhibition of Jeff Wall he brought me to see the academy of Dresden and before going our own ways again we drank a coffee and tea and had a conversation on what we do and think. I found quite interesting the work of Kata and the general artistic attitude of Mikka, but even after a direct invitation, none of them has participated within the suitcase.