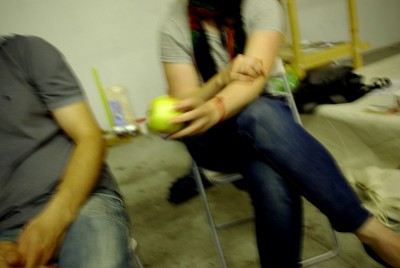 It hasn’t taken so long to come back to the geographic latitude of my initial departure as it took me to reach the most northern spot of the journey in Wedding, Berlin. The flight to Venice and a short stop for catching the train for Ravenna seemed a good opportunity to pull the apple of Anna Watzinger, which by that time became already “la mela”, out of the suitcase and take a picture of it on the train station.

Emilie Delugeau gave me exact instructions how to reach her in her SintflutStudio but somehow I managed to take a bit longer way than was planned. The complex of the buildings in Gerichtstrasse 23 that now offers space to a number of artists feels really a Berlinesque squatted area hidden from the face of the street around courtyards reachable through passages. 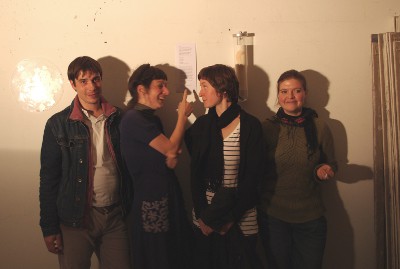 Emilie announced already in email that she spoke to some artists about Art in a Suitcase and that beside her three other artists are interested to take part in it. When I arrived to the studio I met two of them, Til Köhler and Annabel Lange. It is pretty obvious that the text that accompanies the project is just some kind of first step in communication and a further explanation is needed for those who are more interested. Therefore I explained a bit more about what and why and they already suggested their works that would be appropriate for the travel. Annabel brought All-Terrain, a recording of spoken orders that work as designing an imaginary path. Til has chosen a painting that uses the form of a comics page with seemingly connected remarks that persons in the image are saying. Emilie decided to show Odalisque at the event but because of a heavy frame another decision has been taken and now Intimacy is travelling in the suitcase. Aline Helmcke was the forth artist interested in taking part within the suitcase but she didn’t manage to come earlier than to the Tuesday evening event. She brought two miniature drawings, one on a cardboard 10 cm in size and the other in a frame of a 35mm slide. The latter is to be presented in a small slide viewer that has to be held directly in front of the viewer’s eye and it creates its own space with the projection. We decided this was more suitable of the two.

After holding a speech three times in the previous places, that I found a bit long and not serving the purpose, I hoped that merely describing the basic ideas of the project would lead to discussions about the exposed works. The day after Emilie told me that some visitors missed the explanations. I still don’t know how to feel about it because finding a balance between obviousness and encouraging curiousness appears to be an important issue.